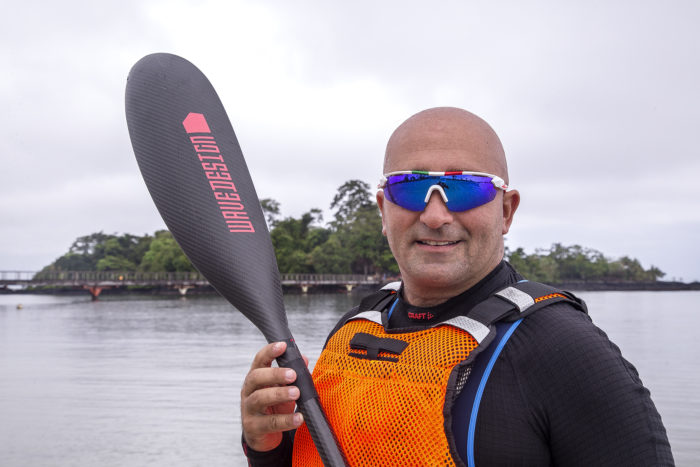 It has been “Back to Africa” for Francesco Gambella the record breaking man. After crossing the Tyrrhenian Sea, after the Mexico-Cuba endeavor, Indonesia, Lake Victoria and Dubai, this year the canoeist has braved the Equatorial Guinea waters in Central Africa. This challenge is yet another initiative, of a long standing series, Gambella has organized in support of NGOs; the present effort will be in favor of Amref.

The endeavor, held in October, has been carried out quite smoothly, besides the pouring rain, thanks to a lack in wave activity in the Atlantic Ocean.

The crossing set off from the city of Sepopo and landed for arrival in the capital city of Malabo (both in Bioko Island). At the arrival, president Teodoro Obiang Nguema Mbasogo and ministers of his cabinet greeted the Italian canoeist. The welcoming ceremony was particularly appreciated by the athlete and his staff that, in gratitude, they decided to donate the vessel used for the endeavor to the local museum in Malabo.

During the official meeting that followed the endeavor, the President of Equatorial Guinea has cared to underline the special ties of friendship that unite his country to Italy and has gone as far as calling for stronger ties and an improved partnership between the two countries in a foreseeable future.

The sporting event was held within the celebration programme to mark the 50th anniversary of independence from Spain.

Equatorial Guinea is a young country covered by 58% with equatorial rainforests. Thanks to the recently established oil extraction industry (now ranking third African producer), Equatorial Guinea has been capable of starting a new era of infrastructure construction; an excellent network of roads and five international airports have been developed. This will lead the country to open itself up to the global touristic market in a foreseeable future.