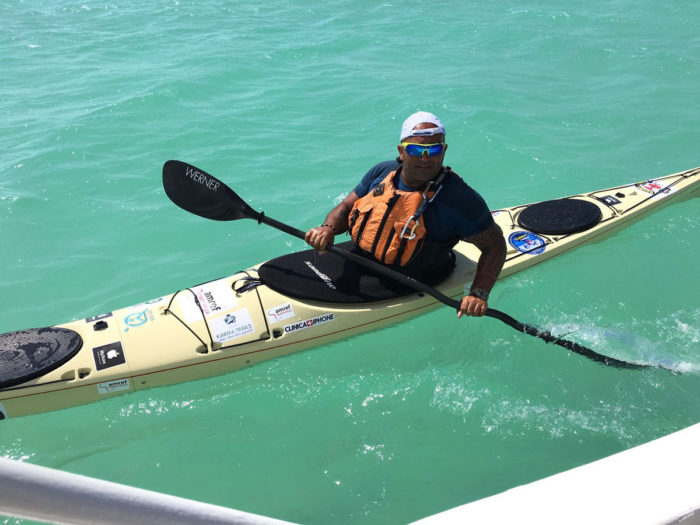 Yucatàn Kayak Expedition; May2016, 200 km to be covered in just two days departing Playa del Carmen and arriving in the beautiful island of Holbox.

The athlete and the staff departed Rome airport boarding gear and canoes in the plane hold crossing to Cancun with a 12 hour flight. Upon arrival they got to meet Giuseppe “the myth” Crapanzano, head of Experience Hotel and main sponsor of the endeavor; with him, they spent three days settling down and fine tuning the canoeing gear and support logistics.

This stretch of sea in the Caribbean features strong currents, fortunately in favor, of some 4 knots. On the first day Francesco met rough seas with 2 meter swelling that caused more than a little concern, but fortunately he managed to reach Cancun by nightfall. Half way through the feat, after a little rest, Francesco intended to set out again for the night leg, but caution made him wait until 5 a.m. for the reported presence of some less than companionable subjects in the area. The forced stop entailed a delay of some 12 hours on the schedule, but fortunately, in the mean time, the sea calmed down and a strong current in favor led the athlete within 30 km from the arrival, to a remote fishermen village where a quick lunch was provided. Around 4 p.m. Francesco triumphantly enters the Experience Hotel premises, hailed as a hero by a host of people and tourists on boats, vessels and canoes followed by the usual media coverage and interviews relayed also by the Italian network news such as Tg1 and Tg5.