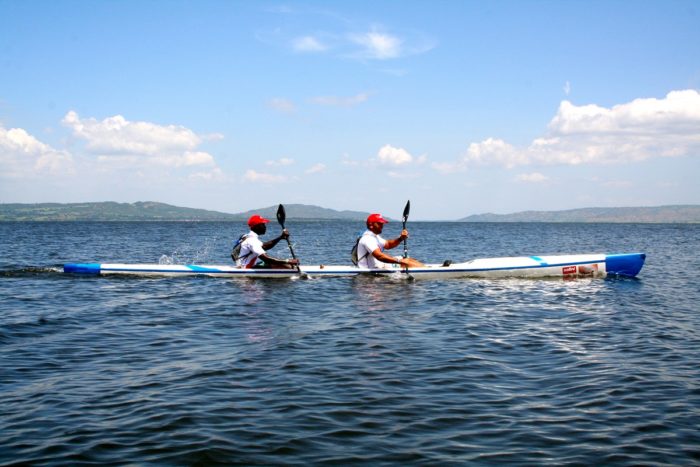 2010 proves to be the right time to brave Lake Victoria, the largest tropical inland basin in the world, home of crocodiles and hippopotamus. Two years worth of traveling and inspections were necessary to organize such undertaking in order to plan for security given that the country was just emerging from a 20 year long conflict that has seen armies largely accounting for underage fighters, stolen from their families to be military trained while being deprived of their youth.

The athlete and his crew reached Kampala just the day before the beginning of the endeavor, in time to join the Ugandan Ministry for Tourism at the launch press conference. To our great surprise we realized that such conference was filled with all the local tv networks plus a large share of the international broadcasting scene: BBC and Reuters just to name two. Even before to set a paddle in the surf, our point was already made.

It all begun in Jinjia, a beautiful Ugandan town set on the lake shore, in the Napoleon Gulf, birthplace of the Nile and starting point of its journey towards the Mediterranean Sea. With the athlete, a long standing African friend of his, Seif Patwa head of the African Canoe Confederation that groups over 20 canoeing local associations. The project started as a way to promote canoeing in Africa while raising funds towards water related Amref initiatives, the largest African NGO and shared with a Kenian canoeists, Vincent, that at the time was aiming at taking part in the 2012 London olympic games. During a stop, they were robbed of all the necessary gear, money, the GPS and the cameras; two years worth of planning, vanished in the blink of an eye.

Here the point of view of the athlete:” Two years spent in preparing the expedition but just minutes to be robbed of all the essential gear. Luckily, thanks to my previous experiences and my stamina, the depression has quickly been turned in action, looking forward to turn an ugly page in an opportunity.

The following day, I find myself sitting on a double Surf Ski with Vincent, behind us the source of the Nile, we are both ready to jump back in time and set off from Jinjia in Uganda, to Kisumu in Kenia doing it just like, 100 years before us, Livington and the Duke of Abruzzi did before us: a 5 day paddle with no reference points, asking local communities for directions, informations about dangers like hippopotamuses, crocodiles, water snakes and pirates, beyond nightly hospitality; carrying just Amref with us in our hearts.

Every night stop then, became an unforgettable experience, we’d beach on one out of 3000 tiny islands in the lake, we’d get in touch with the head of the local community asking for permission to stay and rig our tents. At night we’d cook our dinner and we share with the locals, often providing their first contact with the MUZUNGU (the swaili word for white people). The third day we run out of drinkable water for the limited quantities allowed on our backup wooden fishing boat, and we decided to cook with the lake water, well knowing that besides being the largest tropical lake, the Victoria is also terribly polluted.

We thought that keeping the water on the boil for some 10 minutes will at least eradicate the worst of the bacteria but, within the day a crippling infection and a high fever forced me to seek contact with Amref and to reach their hospital. In a day and a half I manage to start eating again a little. Noticing an improvement in my conditions, I decided to tough it out and to go ahead anyway and in some 5 days I managed to reach Kisumu. But not without yet another mishap. Just on the boundary between Uganda and Kenya, near the first island in Kenian territory, we were approached by a boat with three individuals onboard, one of which was armed; we also saw more weapons under a tarpaulin. The men identified themselves as Ugandan regulars and fortunately let us go unscathed. Only later we were told that those were well known pirates. We could have proved to be a luscious treat for the foodstuffs and the outboard motor we were carrying (highly profitable in the neighborhood) and more luring gear besides.

Probably we were saved by the BBC, broadcasting the news of our arrival in the area, and the desire of the thugs to maintain a low profile.”

Also in this occasion the endeavor profited 15 thousand Euros that have been turned in 5 new water wells in the Kenian area of Makueni.